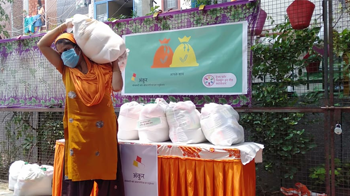 India now has close to 3 million (30 lakhs) people testing positive for COVID-19. Close to 54000 have lost their lives. While the recovery numbers are good, hospitals are overflowing with active cases, especially in the most affected states of Maharashtra, Tamil Nadu, Andhra Pradesh and Karnataka. The lockdown has been eased into a phased unlock and the advisory on physical distancing, mask wearing, sanitation and hand washing are actively promoted.

While a trickle of migrant workers has started to return to former work locations, millions who have lost their jobs continue to be in precarious situations. Lack of jobs and wages have deeply affected their food, medical and other essential needs.

Education of children is a major casualty, particularly for 50% of the population who do not have internet access or smart phones and cannot benefit from online classes that are in place in many schools. Prevented from continuing at school, many of them are on the verge of entering labour or other engagements. Girls, children with disabilities and children of minorities and certain ethnic groups are the most vulnerable.

HCNF, with resources raised from many of you through programmes such as ‘Music for a Cause’, Frowning Clown and many others, has supported children from marginalised communities in Delhi and Pune. The funds have been utilised for distributing food, school stationery and books, remedial classes and other forms of support to children. We are immensely grateful to all our donors for their concern and generosity. HCNF would not have been able to support children and communities without your valuable contributions.

The effects of the pandemic on poor children and communities are long term. Parents cannot afford their to pay for health, nutrition and education due to loss of jobs or enforced relocations. Many migrants who returned to their villages have taken to work under MGNREGA, which will fetch them only survival wages and that too for limited period of time.

HCNF continues support to such children in migrant and marginalized communities for the long term, through educational inputs, preventive measures against the infection during the pandemic, food, nutrition and a healthy environment. Once again , we thank you for your generous donations over the past six months and look forward to your continued assistance towards the well-being of at least some of many millions of affected children. Your contribution will go a long way in creating a future for them.