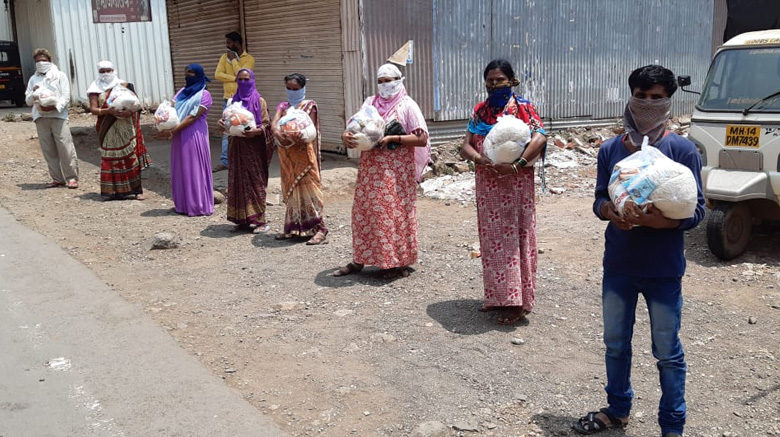 It’s over 80 days since the first COVID infection was detected in the country and while the initial days were calm – the situation escalated very soon. Some states where the earlier cases were detected, declared a lock down by 20th March and a Janata Curfew was called by the Prime Minister on the 22nd of March. Subsequent to this more states went into full lockdown. It was around this time that HCNF began its responses as it realized that the pandemic is going to affect a large section of the population and will create both a health crisis and also an economic slowdown. On the 24th March night the Prime Minister announced a three weeks lockdown with a short notice of four hours and everybody was advised to stay where they were. This lockdown was applauded by nearly all. However it lacked adequate preparation and this left a large number of migrant, daily wage earners, casual, labour and homeless people anxious and worried. A large section of them wanted to go back to their homes in faraway villages and they started walking hundreds and sometimes thousands of kilometers. Many of them were left stranded. This included children, families, unemployed adults, women, homeless persons, daily wage earners and other vulnerable groups and it was obvious that they needed immediate support. HCNF got into discussions with its partner organization Center for Youth Development and Activities (CYDA) and set the ball rolling to provide food to these stranded groups.

HCNF’s initial fundraising drive raised enough to provide food materials to over 1250 people for at least 10 days. However this was not nearly enough. HCNF then became a part of the ‘No One Shall Go Hungry’ campaign which provided a platform for like-minded charities across Pune to come together and ensure these vulnerable groups and especially children do not go hungry. So far this campaign has reached out to over 30,000 people.

To significantly scale up the help that could be offered – HCNF also facilitated a large grant for CYDA from APPI and an aggressive referral based fundraising campaign that has so far shown significant returns. Through these means help reached out to migrant families and even institutions like a home for blind children in Pune. HCNF also supported families and children through the Delhi based organization Matrisudha.

Meanwhile the lockdown is set to continue till at least 3rd May and the situation continues to be grim. Lack of food, cash and nutrition is affecting the families and the children rapidly. The need is huge and can be fulfilled only by the distribution of ration and assistance from the government. Though the government has announced some assistance the rolling out of this is also rather slow and needs to be scaled up. Large numbers of families and children are still going hungry and needs to be cared for and supported urgently. Hence HCNF continues its efforts to raise resources and support the needy communities to the largest extent possible.